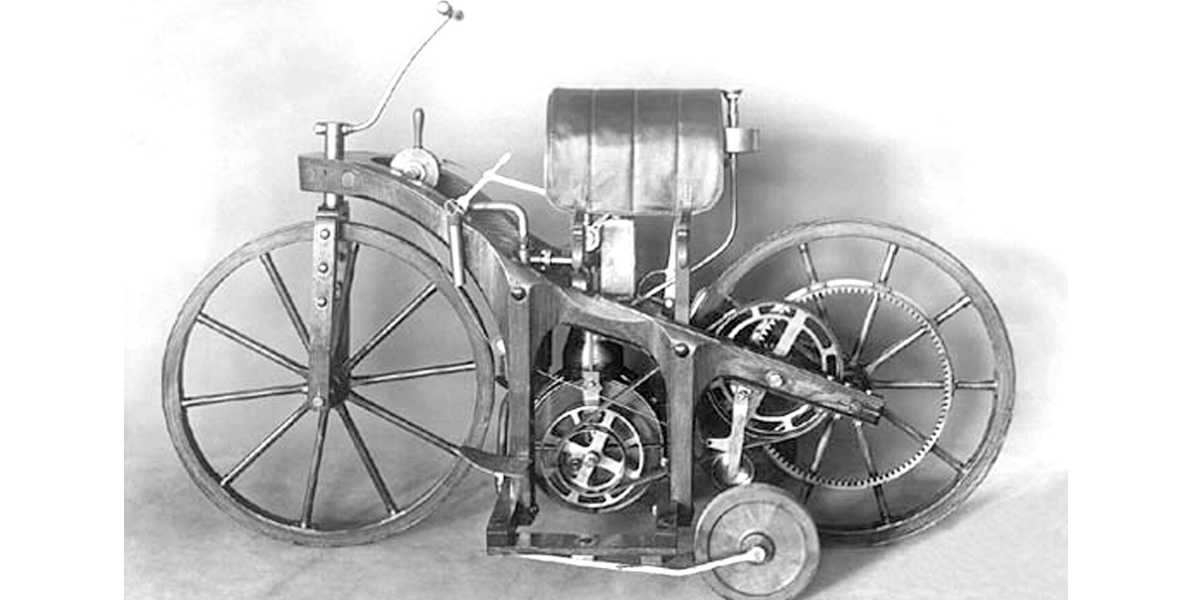 Well, we gave a closer took to such interest of yours and then, we have decided to write an in-depth discussion on the invention of the motorcycle.

Basically, here, we’re going to make a detailed and comprehensive discussion on the motorcycle so that every motorcycle lover can get the information they have desperately been looking for.

A motorcycle – often referred to as a cycle, motorbike, or bike – is a motor vehicle with two or three wheels.

However, the “Legal Definition” of a motorcycle is quite different from the one we have mentioned above.

Legal Definition of a Motorcycle

A motorcycle, by law in most of the countries due to the purposes of taxation, registration and rider licensing, can be generally defined as a two-wheel powered motor vehicle.

Well, the design of a motorcycle may vary to a great extent because of serving a wide range of purposes – cruising, commuting, long-distance travel, racing, along off-road riding.

We must let you know that Hildebrand & Wolfmuller, in the year 1894, did become the first-series production of the motorcycle.

And, at the present moment in time, the Top Three Global motorcycle manufacturing companies on the basis of the volumes are as follows:

Motorcycles, in developing countries, are regarded as utilitarian because of the lower prices and greater levels of fuel economy.

For Your Information, 58% of the total motorcycles all over the world are in the Asia Pacific and Eastern and Southern parts, excluding the car-centric country – Japan.

You’ll be much astonished to know the fact that the term “Motorcycle” has got different types of legal definitions according to jurisdiction.

To illustrate these types – street bikes incorporate scooters, cruisers, sportbikes, and mopeds along with different other motorcycle types.

And, the off-road motorcycles consist of different motorcycle types ideally designed for dirt-focused racing categories i.e. motocross, and these aren’t legally permitted in most of the areas.

Finally, the dual-purpose motorcycle types like those dual-sport styles are manufactured keeping in mind to ride them off-road but, these have also those distinct features which have made them comfortable and legal on the street at the same time.

Each configuration of those wide ranges of motorcycle types offers either broad capability or specialized advantage, and each of those motorcycle designs creates a unique riding posture.

You should also know the fact that – the use of rear seats (pillions in other words) is completely restricted in some countries.

So, you cannot attach those rear seats even just for fun and wish because of such kind of strict law.

Who Invented The Motorcycle?

The name of the first petroleum-fueled, internal combustion motorcycle was the Daimler Reitwagen.

Who invented the first motorcycle in 1885?

This motorcycle was designed and made by Two German Inventors named Gottlieb Daimler and Wilhelm Maybach in Bad Cannstatt – one of the outer city districts of Stuttgart of Baden-Wurttemberg, Germany in the year 1885.

And, who is the inventor of the motorcycle? – Two German Inventors named Gottlieb Daimler and Wilhelm Maybach.

However, this is not the type of motorcycle that you see today on the streets. Instead, this particular motorcycle was designed with two outrigger wheels that would remain upright while you make the move for a turn.

The German inventors of the first motorcycle (mentioned the names earlier) named their invention as the Reitwagen meaning the “riding car”. Surprisingly, this motorcycle was mainly designed as an experiment for their newly invented engine, rather than a true or complete prototype vehicle.

Let’s have a brief discussion on the first commercially designed self-propelled cycle….

….well, it was a three-wheeled motorcycle named the “Butler Petrol Cycle”. And, the designer or inventor of such motorcycle type is Edward Butler who is from England and did this in 1884.

He shared and showed all of his plans for that vehicle for the first time at Stanley Cycle Show in the year 1884. And, in 1888, that plan was first implemented to build such vehicles by the Merryweather Fire Engine company located at Greenwich.

The Butler Petrol Cycle is completely a different one in comparison to the motorcycle we ride at the present moment.

The engine of the Butler Petrol Cycle was mainly a three-wheeled motorcycle or vehicle where two wheels were at the front side and one on the rear side.

The starting was done by the use of compressed air. And, talking about the engine – it was liquid-cooled, where there’s a radiator over the rear wheel. One could control the speed of the vehicle with a throttle valve lever.

Surprisingly, there was no braking system available at that time that could fit this vehicle. So, the rider had to stop the vehicle by lowering and raising the rear wheel (driving wheel) with the help of a foot-operated lever.

There were also two small-sized castor wheels that would bear the weight of the entire machine.

So, the question is – where would the driver sit?

Well, there was a seat between the front two wheels where the driver used to seat while riding the “Butler Petrol Cycle”.

However, the saddest part is – it was not completely a success because Butler was not able to arrange a sufficient amount of financial backing at that time.

According to many authorities who mainly excluded diesel-powered, or electric, steam-powered two-wheeled vehicles from the original definition of a “Motorcycle”, gave the credit of the inventor of the first motorcycle of the world to Daimler Reitwagen.

However, because of the drastic rise in the use of electric motorcycles all over the world, considering only the internal-combustion powered two-wheeled vehicles as the definition of “Motorcycle” is seems to be problematic.

So, still, there remains a debate on the topic – “Who invented the first motorcycle in the world?”

If we consider a two-wheeled vehicle with the steam propulsion as a motorcycle, then many of the Authorities claim the French “Michaux-Perreaux Steam Velocipede” as the first motorcycle. And the patent application of this motorcycle type was filled and submitted in early December of 1868.

On the other hand, almost during the same time American inventor named Sylvester H. Roper Roxbury from Massachusetts invented the “Roper steam velocipede”. This inventor exhibited and demonstrated his invention at circuses and fairs in the eastern region of the United States of America in the year 1867. Throughout his entire life, Roper Roxbury built around 10 steam cycles and cars starting from the year 1860 to 1896 (until his death).

Who Invented the First Motorcycle – Synopsis of Early Inventions

As we have already mentioned, there’s a huge debate regarding the topic – “who invented the motorcycle first”.

So, ere, in the following, we’re going to give you a summary discussion on who created the motorcycle in the world for the first time.

We believe that this table regarding the “Early Inventions of First Motorcycle” will give you a clear and specific idea about this particular topic.

What are the First Motorcycle Companies?

In the year 1894, Hildebrand & Wolfmuller was known to become the first series of production-level motorcycles and also the first model to be called a motorcycle (in German – Motorrad).

And, in the year 1896, a bicycle manufacturing company named “Excelsior Motor Company” – located at Coventry, England – started the manufacturing procedures of their first motorcycle model.

Additionally, in the United States of America, the first production motorcycle was the orient-Aster which was built by Charles Metz in the year 1898 at his own factory located at Waltham of Massachusetts.

So, this is our comprehensive and detailed discussion on the topic – “who invented the motorcycle”.

At the same time, the table we have created named “Who Invented the First Motorcycle – Synopsis of Early Inventions” will give you a quick summary of the initiatives taken by the world’s first inventors of the motorcycle.

However, if you think that you have any questions regarding the inventor of the motorcycle, then make sure you message us at any point in time.

We’ll surely extend our helping hands to help you out in this regard.

Honest Rider is a participant in the Amazon Services LLC Associates Program, an affiliate advertising program designed to provide a means for sites to earn advertising fees by advertising and linking to Amazon.com. *Amazon and the Amazon logo are trademarks of Amazon.com, Inc., or its affiliates.